Special Note to Past Members

The NLWC would like to thank you for joining our Club in the past, and we hope that you will again join us for the 2022-23 membership year. Your support is needed and much appreciated!  Because of your generosity, the NLWC has had many very successful years with many wrestlers receiving the opportunity to reach the highest levels of the sport.

Some Quick Facts About the Nittany Lion Wrestling Club

USA Wrestling, the national governing organization for the sport of amateur wrestling, has designated Penn State University as an Olympic Regional Training Center (RTC).  The NLWC serves as the administrator for the Center with the Coaches being Cael Sanderson, Cody Sanderson, Casey Cunningham, Jake Varner, Mark McKnight, and Jimmy Kennedy.  Practices are conducted year round in the Penn State Wrestling Room in the Lorenzo Wrestling Complex.  In these practices, the top U.S. freestyle wrestlers, qualified college wrestlers, and qualified high school wrestlers work together to make each other better and to build both the present and future U.S. wrestling champions!  Wrestlers from other Olympic RTC's around the U.S., from other countries, and from Penn State and other college programs train at the NLWC Olympic RTC on a regular basis.  In addition to the daily Olympic RTC practices, the NLWC Olympic RTC occasionally host USA Wrestling National Team training camps.  The NLWC supports wrestling at all levels but focuses on the Olympic Development of the athletes who train at the Club's Olympic Regional Training Center.

The Regional Training Center Coaching staff, comprised of Cael Sanderson, Cody Sanderson, Casey Cunningham, Jake Varner, Mark McKnight, and Jimmy Kennedy, has recruited elite wrestlers to live in Central Pennsylvania and train at the NLWC’s Olympic Regional Training Center.  This program is known as the NLWC Resident Athlete Program, and it is designed to provide the coaching, training environment, and financial support necessary for these individuals to compete for and win Olympic and World Championships.  The NLWC Resident Athlete Program and U.S. Olympic Regional Training Center coaching staff is widely recognized as one of the best in the world and has done an incredible job of developing the wrestlers who train at the Club's Olympic RTC.

Current Resident Athletes are Bekzod Abdurakhmonov, Anthony Cassar, Jordan Conaway, Thomas Gilman, Franklin Gomez, Nick Lee, Bo Nickal, Jason Nolf, Jennifer Page-Rogers, Zain Retherford, Josh Rodriguez, Kyle Snyder, David Taylor, Ceron Francisco, and Jane Valencia. Also training with the Nittany Lion Wrestling Club as a member of the U.S. Army World Class Athlete Program is Morgan McIntosh.  These wrestlers are some of the top athletes in the world, and the NLWC is very proud to be represented by these fine young men and women, both on and off of the mat!

Provides training and competition opportunities for collegiate and high school wrestlers who are qualified to participate in the Club’s Regional Training Center practices.

Hosts National Team Training Camps in which the U.S. National Team coaches and the top wrestlers in the U.S. train together with the Club’s Resident Athletes and Qualified Collegiate Athletes.

To become a member of the Nittany Lion Wrestling Club please follow the link Join. A variety of membership options are available. 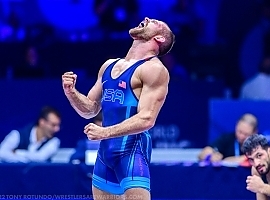