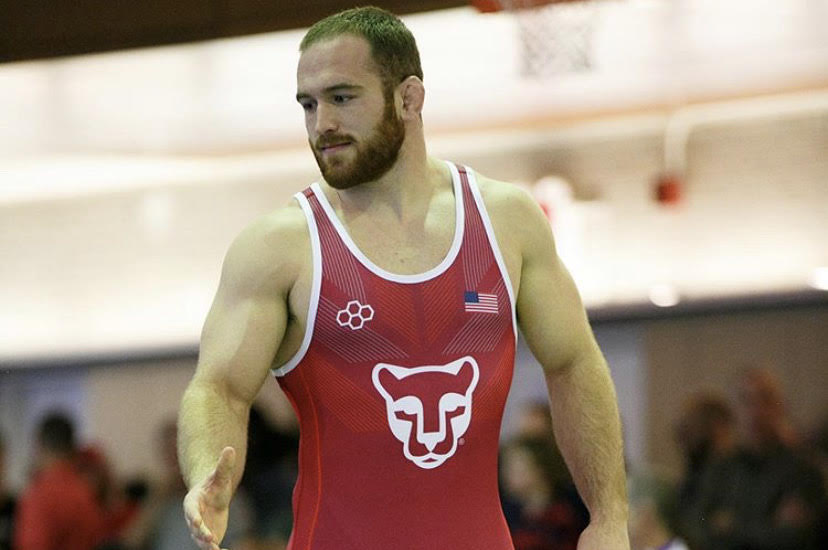 The Club is conducting a series of NLWC Wrestler interviews that will be posted every 2-3 days!

This interview is with Kyle Snyder. The former Ohio State wrestler had a spectacular collegiate career, winning three NCAA titles, and he has also had an outstanding international career, capturing both World and Olympic Gold Medals!

Q:  I think most of our Club members are familiar with your Ohio State and international freestyle careers.  However, could you please talk a little about where you're from, your family, and your wrestling journey from when you first started until you went to college?

A: I am from Woodbine, MD. I have an older brother named Steve who wrestled at West Point. My little brother Kevin wrestled at Ohio State. My little sister Megan goes to school at Towson University and wants to be an elementary school teacher. I started wrestling when I was 5 years old. I have always been aggressive, physical, and competitive. My parents thought that wrestling would be a good sport for me. I went to Good counsel high school for 3 years and I moved to Colorado Springs to train at the Olympic training center. I completed my high school for my last year of high school requirements at Coronado High School

Q:  In many ways, these are unusual and tough times...for wrestlers focused on winning Olympic Gold Medals as well as for those people facing lost jobs or income, sickness, etc.  When I think of wrestlers who have a positive outlook and are quite capable of handling any adversity that comes their way, you're at the top of the list.  Could you provide some insight on your approach?

A: My faith is what allows me to navigate situations in a positive way. I always remind myself of two facts. The first is that God is love. The second is that God is in control. With this in my mind, I know that everything that happens to me is for my benefit and it is to mature my faith in Christ. I don't believe in chance. I believe that God has a very specific plan and He has been executing it perfectly since the beginning of creation. I believe everything that happens to His children is for their good. I read different stories in the Bible of the apostles being thrown and jail and beaten, yet they say they can continually rejoice because they know God is growing them in all these situations. If something isn't going the way that I want it too, then I know it is going the way God wants it too and I would rather His will be done.

Q:  With the support of USA Wrestling, Olympic Regional Training Centers (RTC's) have become an important factor in the growth and development of the U.S.'s top wrestlers.  The NLWC has made support of the Club's RTC a top priority, and both coaches and donors have made a commitment to providing a environment where the Club's wrestlers are provided with an opportunity to chase their dreams.  Do you have any thoughts on what this support means for the wrestlers who have goals of being World and Olympic Champions?

A: As a NLWC athlete, my only focus is on training and competing. Without the support of all the NLWC donors, it would be very difficult for this to be possible. If you want to be the best in the world, you have to believe that everyone is working toward that same common goal. Because of everyone's generosity, I know that we have the greatest resources available to prepare us to win world and Olympic titles.

Q:  Wrestling is a combat sport, and wrestling matches are true one-on-one battles to determine a winner.  At the same time, there is no question that wrestling brings people together.  In NLWC practices, there are wrestlers from different states, different colleges, different ethnic backgrounds, and often many different countries.   The list could go on and on.  Yet, everyone seems to get along and even go out of his/her way to provide encouragement and help one another.  What do you attribute this collegian atmosphere to?

A: I attribute this to the leaders of the NLWC. It starts with the way that they communicate and the type of people they bring into the club. Coach Cael, Casey, Cody, and Varner are great leaders. They love what they do and are always looking for the best way to help all of us. This attitude has spread throughout the whole club. It is really easy to focus on benefitting other people when you know that you are already taken care of. The leaders make sure all the athletes are taken care of and I believe that allows all of us to focus on helping each other. I want my teammates to win and be the best in the world.

Q:  When you won an Gold Medal in 2016, you became the youngest Olympic Gold Medalist in American wrestling history.  When you were on top of the podium and the National Anthem was playing, what was going through your mind at that moment?

A: Every time I'm on the podium I thank God for everything that happened throughout the day. I thanked Him for being with me during the tournament and I thanked Him for everyone He put in my life that helped me get to that point. I also remember thinking about my older brother who wasn't able to be at the Olympics because he serves in the army. I have always looked up to him and know he played a huge role in the way that I compete.

Q:  Do you have any interesting wrestling stories or memories you would be willing to share with the NLWC membership?

A: At the 2015 world championships, I had 3 pennies left over after buying some food. I looked over to my roommate and said that I am going to throw all these up in the air and if they come down on heads then I will win the worlds tomorrow. I threw them up in the air and they all came down on tails. I was like dang... I hope this isn't foreshadowing how the wrestling is going to go. It turns out that the pennies didn't have any impact on how I competed.

Was planning to move on the from the dodgeball question, but we better get your take on it since the importance of dodgeball in determining wrestling success is unquestioned.

Q:  What was your initial impression from your first NLWC dodgeball game?

A: I immediately recognized there was some strong alliances between players and the quality of play was high. It's also a high intensity environment. Takes a couple games to follow know where both balls are at.

Q:  When that moment occurs that someone has the ball and is targeting you, are you more likely to jump, duck, or go for the catch?  Why?  Or maybe this is giving away too much strategy?

A: Depends on what style of dodgeball we are playing. In partner dodge you got to be aware of the amount of players left in and if your teammate is up or not. For the most part I try and catch the ball because the risk is worth the reward. I've got pretty good hands so I catch a lot of them... especially if Manville throws it at me....

Q:  If you have the ball in hand and an opponent dead to rights a couple feet away, do you go a little easy, show no mercy, or does it depend on the opponent?

A. I usually go pretty easy. I've gotten in trouble with that approach a couple times. I've got to get better at throwing at their feet and not their chest in those situations.

Q:  I know you're training for wrestling while in quarantine.  Are you also spending some extra time developing your dodgeball skills?

A: Rest and recovery is as important as the training. I've been resting my shoulder. Spending some time to do some extra upper body mobility. Working on throwing with my off hand. I've also been staying in contact with most of the top players. Those alliances need to be strong when we return.

Q:  What is your favorite saying(s)?

A: I love sayings. One of my favorites right now is "Who can't?!". Meaning that I or the person that I am talking to can do anything if we believe it.

Q:  What food is your go-to snack?

A: Pre NLWC nutrition plan, I would say cereal. Now, it is an apple or pumpkin seeds.

Q:  Who are your real-life heroes?  Why?

A: I like to compete in anything. I like ping pong. I like learning about leadership. I love to study the Bible and goto bible studies. I really do enjoy training and wrestling though. It is one of my favorite things to do.

A: To follow the Lord with 100% commitment and to be focused on His will in everything that I think/say/do. 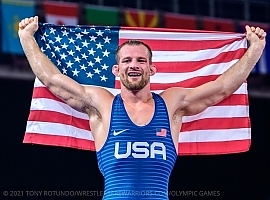